Wastewater treatment works upgrades are an essential and ongoing part of the treatment process. Here’s what you need to consider when upgrading your site.

Utilities face various key considerations when it comes to upgrading wastewater treatment plants (WWTPs). This includes any improvements required by legislation, such as the Water Framework Directive in the European Union, which encompasses not only requirements for discharges but also ambitious environmental objective. The US Environmental Protection Agency (EPA) is also conducting a nationwide nutrient removal study that could have major implications for the country’s widespread nutrient pollution.

All utilities are measured against their performance in meeting their various targets, and compliance is increasingly important as regulation becomes more stringent. The issues that consultants and contractors face when upgrading WWTPs start with a lack of funding, which is an ongoing issue driven by regulatory caps on profits and/or reduced municipal investment. Utilities need to fully justify the costs of any changes, maintenance costs need to be kept to a minimum, and the rising cost of energy needs to be managed.

The aim is to boost ROI and reduce capital expenditure (CAPEX), while ensuring the treatment works still meets its consents and any key performance indicators (KPIs).

There is also a need for increased capacity. The urban population is soaring – over 50% of the world’s people now live in urban areas, and more towns and cities are developing. If a WWTP is struggling due to a lack of capacity, the risks of causing water pollution increase sharply. Managing stricter discharge limits and increased effluent discharges adds to the pressure on utility consultants and contractors to meet consents without driving up costs.

Space is another key consideration. As urban areas encroach upon wastewater treatment works that were once outside the urban perimeter, they restrict the land available for expansion. It is essential that contractors offer options that have a small footprint or can be installed within existing treatment space. It is always necessary to look at space-saving options first, and determine the element of rebuilding that is involved.

It is important that grit removal upgrades are considered at an early stage, as ineffective grit removal is one of the main causes of downstream problems in wastewater treatment works. Consequences include:

Choosing a good grit removal system in itself involves various considerations, not least the size and character of grit that needs to be removed. In design, it is important to recognise that wastewater grit is not homogenous – it consists of a wide variety of materials, often much smaller and more irregular than the 212 µm (micron) diameter perfect dry sphere that is typically assumed.

Grit can consist of particles washed from roadways and other urban surfaces, and can comprise sand, paving materials, eggshells, coffee grounds, seeds, fragments of bone and many other constituents, any of which can also become attached to fat, oils and grease (FOG), making it difficult to settle.

Getting grit removal right not only has significant benefits to downstream assets, but it also saves a great deal of money. Research from Cranfield University in the UK has estimated that for a 25 MLD plant with an asset life of 25 years, the total cost of extraneous grit would be around £0.72 million ($0.93 million), and the calculated break-even capital cost of advanced degritting based on mitigating 50% of the remediation costs is £0.43 million ($0.56 million). Therefore, when starting the upgrade process, grit removal has to be one of the major considerations.

When upgrading a WWTP, owners, engineers and contractors should consider: 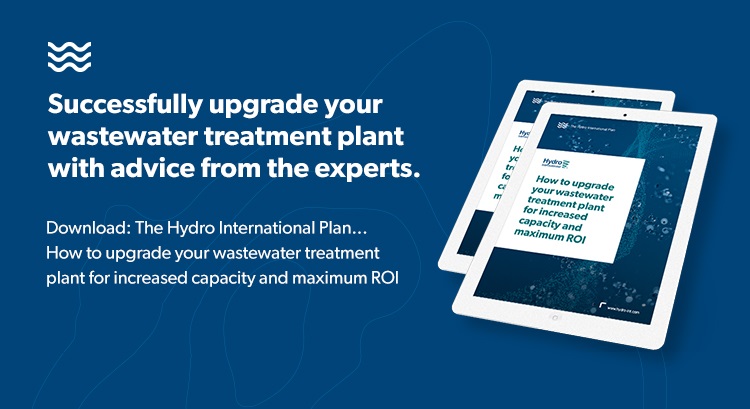 Download the Hydro International Plan to learn how better grit removal can help you upgrade WWTP capacity and improve ROI.

Download the Hydro International Plan to learn how better grit removal can help you upgrade WWTP capacity and improve ROI.

Get the Plan
Hydro Master Logo