EFRA Post-legislative scrutiny report recommendations – the good and the misunderstood

Mark Goodger examines the potential impact of recommendations made by EFRA in their Post-legislative scrutiny: Flood and Water Management Act 2010 report.

The Post-legislative scrutiny: Flood and Water Management Act 2010 report recently published by the UK Environment Food and Rural Affairs (EFRA) has set out a list of recommendations for the next Government.

Some of these recommendations I wholeheartedly agree with, while some have left me with a feeling of déjà vu over what is and what isn’t Sustainable Drainage.

The report states that the “Government has relied on flawed planning policies and that these sub-standard SuDS approaches have led to far too few schemes being installed in new developments and too many schemes failing to delivery maximum biodiversity, water quality and amenity benefits.”

The SuDS Approval Bodies outlined in Schedule 3 of the Flood and Water Management Act 2010 (FWMA) were scrapped and the responsibility for SuDS put under planning.  The English Non-Statutory Technical Standards for sustainable drainage systems, published in March 2015, were ‘underwhelming’ to say the least, with no real detail at all.   However, CIRIA’s The SuDS Manual (C753) (published in November 2015) has gone a long way to address the lack of knowledge for design and maintenance of SuDS.

It makes sense for SuDS to be considered at the planning stage of a development to ensure that amenity, quality and biodiversity assets are included.  So, I agree that tightened planning guidelines, improved and enhanced standards should ease the planning process as well as open up routes for easier adoption.

Any improved standards will also likely include clauses about maintenance, but without the mandatory adoption of SuDS systems by SABS to ensure long-term maintenance we will therefore still run the risk of SuDS being built and maintained for an initial period (say 10 years to align with the NHBC warranty) and then subsequently abandoned.  A SuD system that isn’t maintained is a liability, an eyesore and could increase the flood risk it was originally designed to alleviate.  Recovery of such systems can also run into millions of pounds.

In our SuDS: The State of the Nation 2016 survey, respondents (73%) believed that more standard technical guidance is needed on the long-term maintenance of SuDS.

This is being considered by the WASCs (see reference FWA 27) and this can only help to ensure that SuDS systems are maintained correctly and continue to operate as designed in perpetuity.

Under the FWMA there was a requirement for Local Authorities / SABs to maintain a register of assets.  There doesn’t seem to be any mention of this in the EFRA report, but it could be one way of facilitating the oversight of assets and the maintenance of them.

Not High Quality or Low Quality but a Full SuDS Toolbox

Chapter 2 of the report states “SuDS are designed to control surface water run-off close to where it falls and to mimic natural drainage as closely as possible.”

In Section 11 ‘Quality of SuDS’ the report states that “The concept of sustainable drainage covers a range of measures from a simple system which restricts discharge using conventional pipes, through to complex green infrastructure systems incorporating features such as permeable surfaces ponds and swales, green roofs and rainwater harvesting.”  Going on to say that these “more complex schemes, broadly defined as ‘high quality’ SuDS”

This gives me cause for concern and a sense of déjà vu.  Alex Stephenson discussed this in his blog ‘SuDS: a Matter of Definition’ back in July last year, but nearly a year on there still seems to be misunderstanding as to what is, or isn’t Sustainable Drainage.

The new CIRIA SuDS Manual (C753) says that SuDS are designed to maximise the opportunities and benefits we can secure from surface water management with four main categories of benefits that can be achieved by SuDS:  water quantity, water quality, amenity and biodiversity.  These are referred to as the four pillars of SuDS design.

Whether a SuDS scheme is “High Quality” or “Low Quality” should be judged on the outcomes that it delivers (ie. meeting the objectives of the Four Pillars of SuDS) and must not be judged using a “points-scoring” system to promote a small sub-set of components from the toolbox.

How can a precision-engineered, proven device that provides either accurate flow control, or consistently and reliably removes pollutants be considered ‘low-quality’ just because they’re not above ground?  In many cases these proprietary engineered systems have enabled the use of more natural SuDS or enhanced their performance and longevity. They are also ideal for retrofit situations or on sites where existing services and infrastructure are often combined with a lack of space.

In our 2016 SuDS: The State of the Nation survey respondents also had strong opinions about the necessity of being able to access a whole SuDS toolbox.  The vast majority of respondents (73%) agreed that designing from a full SuDS toolbox would facilitate a sustainable approach.  Most also agreed that proprietary SuDS components are essential to the SuDS toolbox (77%), and can facilitate Green Infrastructure (70%) as well as help to ensure the long-term maintenance of SuDS features (63%).

Some above-ground SuDS systems, touted as ‘examplar’ (or high-quality by EFRA’s definition) have only been made possible by use of some of these precision-engineered devices.  One such scheme is Elvetham Heath in Fleet where a housing development’s SuDS system of interconnected swales and large ponds was made possible using Hydro-Brake® vortex flow controls.

Another such scheme is the £4.28m award-winning flood defence project in Southwark, South London.  This scheme combines above and below-ground temporary flood storage to create a pioneering solution at two sensitive and historic parks.  Community groups had initially objected to flood relief measures involving the use of overground pond storage in the Grade II listed park areas.

To enable our housebuilders and developers to cost-effectively deliver the planned million new homes by 2020 and include reliable, maintainable SuDS on these developments, any statutory standards for the design and maintenance of SuDS must take into consideration the use of the whole SuDS toolbox and not just a small sub-set of components.

With another general election looming on 8th June, we can only hope that the recommendations in the EFRA report are given serious consideration and acted upon. 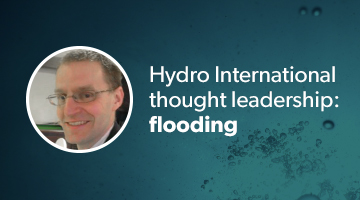 Get insight into flood mitigation

News SuDS: the alarming disconnect between desire and reality

As CIWEM and WWT publish the A Place For SuDS report, Mark Goodger highlights an alarming disconnect between what stormwater engineers want to deliver and what they are able to deliver.

Share
News Will Brexit make a difference to the UK Water Environment?

With the UK looking toward a future outside the EU, Mark Goodger asks whether there will be any difference in the way our water environment is protected, or whether it will be business as usual.

Our experts can help you to plan, specify and maintain your flood mitigation project. Download the eGuide “How to design, implement, and operate a water management project to mitigate flood risk”.